We are pleased to announce that on Tuesday, September 8, 2020, the Board of Trustees for the Medicine Hat Catholic Board of Education passed a motion:

This motion was carried unanimously.

Rick was born and raised in Medicine Hat, Alberta. He attended St. Louis School, Monsignor McCoy High School and the Medicine Hat College. During Rick’s younger years he had exceptional athletic abilities participating in competitive swimming, playing junior football for the Medicine Hat College Rattler Football team and playing Rugby for the Medicine Hat Ogres. When Rick decided to hang up his cleats from football and rugby, his love for sports continued in a coaching capacity. He was a defensive coach for the McCoy Colts football team for 36 years. He had a true talent to inspire young players and was particularly interested in developing the players that needed extra encouragement and attention. Rick demonstrated exemplary leadership as a coach. He was generous with his time and support to the team. He strongly resisted any individual recognition or attention acknowledging his efforts. Instead he insisted on focusing his success on the combined efforts of players, coaches, teachers and parents. There was no “I” in team where Rick was concerned. Coaching was Rick’s greatest pleasure. He often said that coaching was a gift that allowed him to be 16 again.

Rick was employed by the City of Medicine Hat as a firefighter for 35 years and recently retired. He was a dedicated firefighter and took his responsibilities very seriously. Rick was a coordinator for the dive rescue team for many years and coordinated many search and recovery missions in open water and ice incidents. He loved his job and enjoyed mentoring the new members with the fire service and serving the community. Rick truly valued the brotherhood within the department and was proud to call them his fire family. Rick never passed up an opportunity to have fun and spend time with his friends. He was well known in the community for his positive attitude and love for life. Rick lived 100 years in 62 and lived his life his way! It is with deep sadness that Rick’s family announced his passing on Saturday, July 11, 2020. Rick leaves to cherish his memory: wife, Linda of 36 years; sons, Derik (Janelle) and Ben (Janae) and their daughter, Shelby as well as numerous other family and friends. He will be greatly missed by all that knew him.

The Monsignor McCoy Colt’s Booster Club, in partnership with the Board of Trustees, will be planning an official ceremony to mark the renaming of the field with the Boksteyn family, and former and current Colt players, staff, and fans in attendance. More information regarding the event will be shared with the public in the coming weeks.

The Impact of COVID-19 & the Call to Christian Renewal

On Thursday, October 8 at 10:00am all parent and guardian contacts will be sent an automated… 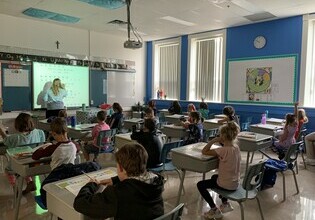