Although the tragedy of 215 children buried at a former residential school in Canada brings with it a tremendous amount of grief in the community, Raevon Gehring sees growth and opportunity in its wake as well.

Gehring, the Indigenous Support Teacher with the Medicine Hat Catholic Board of Education, is encouraged by the outpouring of support and hopes it’s a sign of things to come when it comes to reconciling our country’s past.

“The most important part is that the community and the nation come together and try to foster the truth and reconciliation for the future,” she said shortly before a division-wide prayer ceremony Monday afternoon. “We as a people are coming together to hold each other up, which is fantastic.

“When you hear the discovery of 215 lost children, placing our flag at half-mast for 215 hours, having the moment of silence at 2:15 p.m., wearing the orange shirt to follow up is more than we would have had, let’s say, before 2008, before the (Federal Government’s) apology.”

Mass graves containing the remains of children were discovered in Kamloops, at the site of a residential school which operated from 1890 to 1969. The Tk'emlúps te Secwépemc First Nation announced the discovery Friday, May 28.

Medicine Hat Catholic will keep division flags at half-mast until June 8, representing one hour for each of the 215 children. A moment of silence and prayer was held in all schools at 2:15 p.m. Monday, May 31, and students and staff are encouraged to wear an orange shirt on Tuesday, June 1.

Gehring had a presentation with the Grade 4 class at Mother Teresa School Monday, and made sure to talk to them about the sensitive topic.

“We read a little bit regarding residential schools,” she said. “We also focused on how we are going to make this nation better in the future.” It brings light to a dark past.

“It’s overwhelming,” she added. “I’ve been brought to tears several times today just from people in support, and recognizing the effects.”

Approximately 4% of the division’s students identify as either First Nations, Metis or Inuit.

Back to School Basics

Out of School Care

St. Patrick's School Do you have an Out of School Care Program? YES Who qualifies to… 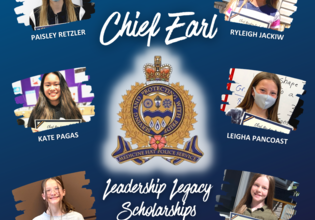 On June 5, six exemplary students from our division were honoured with the Chief Earl Leadership…